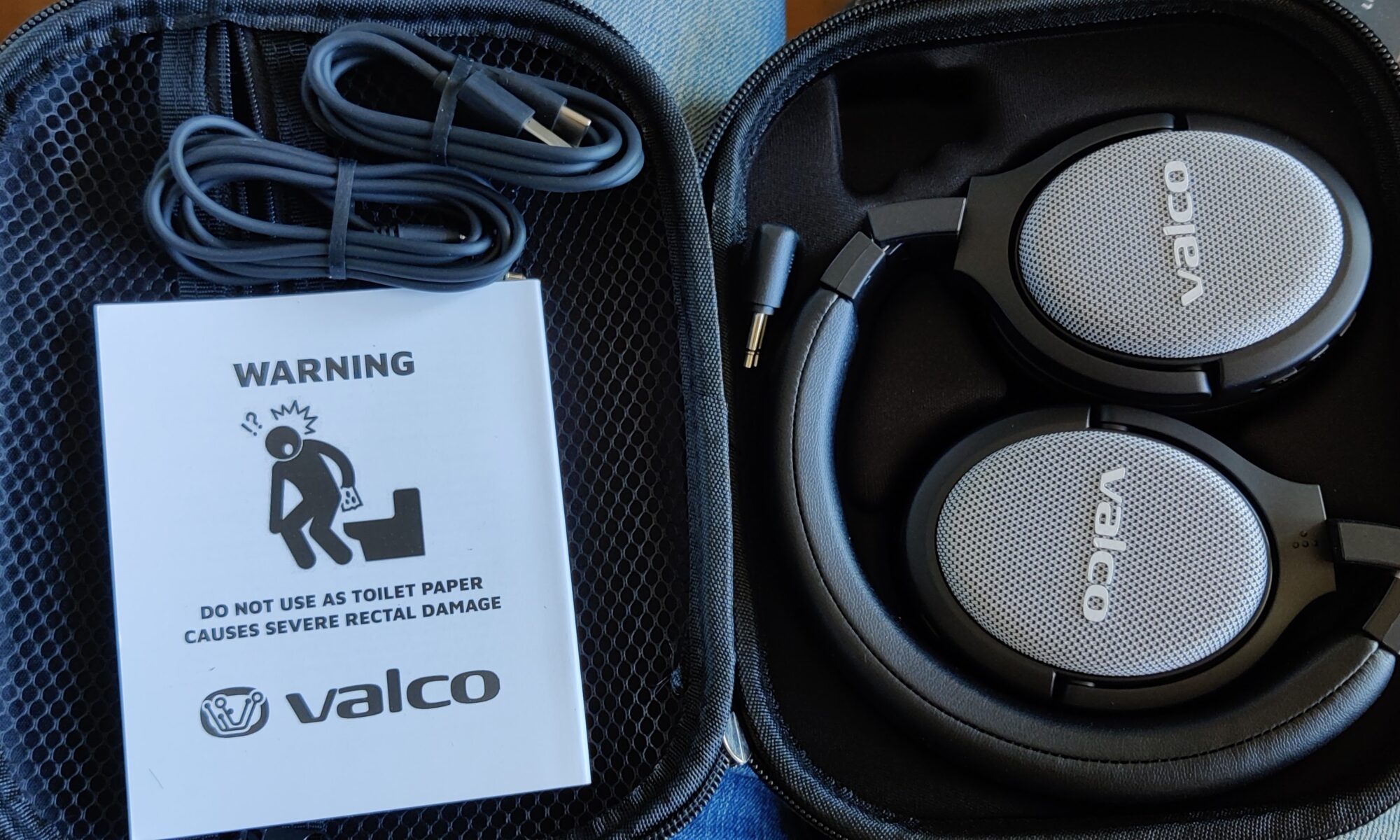 I might have finally found a set of headphones that I actually enjoy the sound of, that have good microphones, and that I can wear for hours on end without my ears slowly deforming and then dying, and I thought I would write my experiences down to maybe inspire someone else to get better headphones.

NB: None of the below links are affiliate links, but I am happy to send you some if you want.

As far as over-ear headphones go, I recently got and instantly fell in love with the Valco VMK20 Wireless Headphones. I have to admit, I was sniped by an actual ad, which hasn’t happened in quite some time, but their Finnish charm and self-deprecating humor got me, so I figured I’d check their claims and otherwise yell at their CEO. Surprisingly, the headphones are actually as good as described! Funny how things go if there’s no gigantic marketing spend in front of a smaller but formidable controlling department!

For in-ears, I was using the Turtle Beach Battle Buds for a while for video conferences and voice chats, and that was ok, but they’re wired and the fit isn’t too great – but you can replace the microphone with an awesome one if you are so inclined. But the big breakthrough came with the TRN V90 that I got on AliExpress for something like 25€. What can I say, the sound is simply amazing, the fit is great, the pre-formed wire loops keep the headphones in place even during a workout, and the seal is good enough to make the world quite quiet. They are wired out of the box, but you can just connect them to one of the many Bluetooth cables (sic!) the manufacturer offers. I picked the TRN BT3S with the neck loop, because I like looking like a huge nerd. By simply switching the cable for the Bluetooth module, the headphones gain Bluetooth 5.0, aptX, and a CVC6 microphone. The V90 are a teensy-tiny bit “thicker” on the bass end than I’d normally like, but it’s never distracting or overpowering. And they’re comfortable enough to wear when lying down as well.

Are those the best headphones ever? I don’t know, I only tried maybe 40 or so.

If you only have two ears, why do you need so many headphones?

The simple answer is that (almost) all headphones suck, and headphone companies constantly overpromise and underdeliver, especially if you’re, like me, part of an apparently tiny group of people that just wants straightforward, clear sound and ideally a good microphone. Instead, the market is full of headphones with eXtreme Bass Boosting, a Bluetooth range of tens of centimeters, Active Noise Canceling that replaces relaxing wind sounds with distressing electronic whistling, batteries that don’t last even a short journey, and microphones that dangle all over the place so they can better pick up the sound your clothes make as you move, or the neighbors five blocks over whispering.

Some of the noteworthier headphones that I tried:

The BOSE QC35 II, which I finally gave in to buying about midway through my career in consulting (where literally everybody had them, or the predecessor, the QC25), were pretty nice: When I got them, they had some of the best ANC on the market, the sound is good enough, they’re lightweight and they have a built-in mic. However, the sound could be better, the ANC could be better (and newer models by e.g. SONY make this very obvious), the microphones could be a lot better (for a long time, I was wondering how some people on phone conferences had such amazingly bad call quality – then I tried using the QC35 for calls: the moment the phones go into headset mode, the mic strains to pick up even the faintest or far-away sounds, which it will then amplify and feed both into your call and into your ears, giving you super-hearing and the other participants in the call tinnitus). They still have a certain status attached to them, but to be honest, I would rather have better quality build & sound, and I am also not a fan of BOSE’s app strategy, where they try to trick you into letting them track you, and shit. All in all, not unhappy with the purchase, but glad I did get them at a discount.

The OneOdio Pro-10 Over-Ear were recommended by the Sendegate forum, because they come with a microphone which can be detached and replaced by the – very good for its price-point – V-Moda BoomPro. This indeed makes them into a great headset for podcasting or recording spoken audio, but the size and fit of the earmuffs combined with the pressure the headband put on my ears makes them very uncomfortable to wear for extended periods of time. Your mileage may vary if you are not wearing glasses or have a different head or ear shape, and the price point is low enough to just try them out.

There were a bunch of others, like the Anker SoundBuds Flow (quite liked them, but mic wasn’t great), Sennheiser buds that I already forgot the name of, a few no-name “moderator headsets” with proprietary connectors that I had to file down or resolder (but then the mic quality was quite good), the Anker SoundCore Strike 1 gaming headset (which is surprisingly comfortable and has a pretty good, detachable mic, but is way too bulky to use outside of gaming/streaming), some Mobvoi headphones I got tricked into buying after I got my Mobvoi smartwatch which I also didn’t like, some “Zircon” headphones that I don’t even remember buying, the Superlux HD 681 (which everybody knows, I think, but if not, they’re a high quality replica of high-price headphones that shall be unnamed – good, but half-open doesn’t cut it everywhere), the Sony MDR-7506 (which I still think are amazing but I rarely feel like using wired headphones anymore), the ATH-M50X (which I liked for their portability until the headband and padding crumbled and Audio-Technica did not manage to provide replacements…), the RHA MA750i (very nice sound, very good support, but ultimately not reliable enough for me to stick with the brand at increasing price-points), and others.